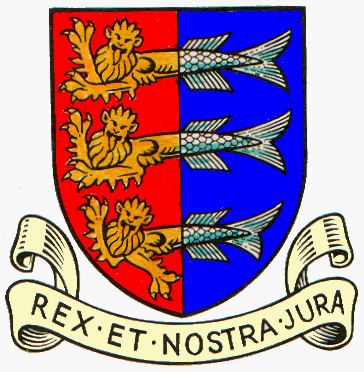 Arms : Per pale Gules and Azure three Lions passant guardant in pale Or dimidiated with as many Herrings naiant in pale Argent.
Motto: 'REX ET NOSTRA JURA' - The King and our rights

The arms were officially granted on December 16, 1908, but were recorded at the Visitation of 1563.

The arms generally in use by the council show the gold lions on red of England dimidiated with three silver herrings on blue. This shield recalls the arms of the Cinque Ports and also suggests that the town is an important English fishing port.

Two other arms were recorded at the visitation and, uniquely, also granted in 1908. Both show a shield divided per pale of the English lions and three herrings and of the herrings on a blue shield alone.