From Heraldry of the World
Your site history : Greater Manchester Fire and Civil Defence Authority
Jump to navigation Jump to search 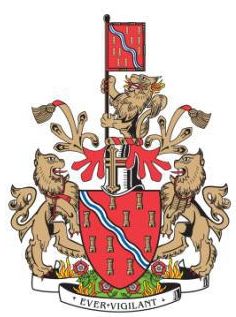 Arms : Gules between ten Towers Or a bend wavy Argent thereon a bendlet wavy Azure.
Crest: upon a Helm a Wreath of the colours a demi-Lion rampant Or incensed proper supporting a banner of the Arms.
Supporters: On either side a Lion Or that on the dexter having Fireman's Axe held by a cord around the neck Gules that on the sinister having a like cord around the neck with a Scaling Ladder hanging therefrom also Gules the compartment comprising a mound of earth issuing therefrom flames proper and growing amid the same Tudor Roses Argent upon Gules barbed and seeded stalked and leaved also proper.
Motto: 'Ever Vigilant'

The arms were officially granted on August 18, 1989. Now used by the Greater Manchester Fire & Rescue Authority.

The shield has ten towers in gold representing the ten districts of the Authority, and across the shield runs a blue and white wavy bend which indicates water, the element most effective in the fight against fire. The shield is supported on each side by a lion rampant, one carrying a firefighter's axe and the other a scaling ladder representing the work of the Fire Authority.

The demi-Lion crest is incensed, i.e. having flames appearing from its mouth and ears as does the ground of the compartment to show fire and its threatening aspects.

The motto, 'Ever Vigilant', has been retained from the original Arms and is particularly suited for the role of a Fire and Civil Defence Authority.