From Heraldry of the World
Your site history : Green College (Oxford University)
Jump to navigation Jump to search 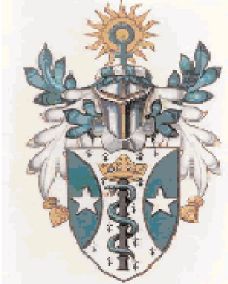 Green College was founded in 1979 as a result of a generous benefaction by Dr Cecil Green of Texas Instruments. The College was housed around the Radcliffe Observatory in north Oxford. This building had been constructed to make up for the lack of appropriate facilities to observe the significant Transits of Venus across the sun in the late 18th century. It was modeled on the classical Tower of the Winds in Athens and remains a very beautiful feature of the famous Oxford skyline. The crest of the college is a representation of the sun behind the symbol for Venus. The white stars are for the Texas homeland of the founder placed on the green field of his name. The Rod of Aesculapius beneath a crown from the University arms symbolizes the medical specialism of the College.