From Heraldry of the World
Your site history : Grevenbroich
Jump to navigation Jump to search 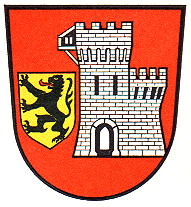 The arms were granted in the last century and re-granted on February 9, 1976.

The arms are canting. The local castle became in 1305 a possession of the counts of Jülich. A castle is in the local dialect a Bruche, the castle of the counts thus Gräfen-Bruche. The arms show the castle and the arms of the counts of Jülich. The oldest known seal, which dates from 1308 and which probably was made in 1305, shows already a castle and the lion. Until the 16th century the seals and arms showed the same combination, but the size and placement of the small arms varied. In the 16th century the arms were divided with the lion in the right half and half a castle in the left part. In the 19th century the old composition was restored.