From Heraldry of the World
Your site history : Greyfriars (Oxford University)
Jump to navigation Jump to search 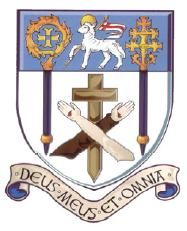 Arms: Argent, in front of the lower limb of a long cross pointed at the foot proper, two arms in saltire, the dexter charnois, the sinister habited in the sleeve of a Franciscan Friar, the hands upwards and appaumee displaying stigmata proper, on a chief azure a Paschal Lamb also proper; over all in dexter flank a crosier erect sable, garnished and headed Or, the head containing a square pierced cross moline, and in the sinister flank an archi­-episcopal staff also erect sable, garnished and headed Or, each limb of the cross terminating in a cross formy.
Motto: Deus meus et omnia

In 1224 Blessed Agnellus of Pisa, the first Franciscan Minister Provincial in England, arrived in Oxford and founded a Friary which continued until dissolution in 1538, and his activity in this respect is commemorated by the Agnus Dei in chief, the Azure being for Oxford. Bishop Grossetete, the famous Bishop of Lincoln, 1235-53, was intimately connected with the Friars and lecturer to them in the 1230's and after their re-establishment in Oxford in this century their house in Iffley Road was named Grossetete House, their previous house in John Street having been named St. Anselm's after Father Anselm Kenealy's name saint.

In the arms Grossetete's crozier has had his attributed device of a cross moline worked into its head and this is balanced in the other flank by an archiepiscopal cross for Fr. (later Archbishop) Anselm Kenealy (who, in 1910 provided the collge with a house), identifiable as his by reason of the device of the cross formy which adorns the limb of the cross and was of the type attributed to St. Anselm. The wooden cross with the arms in saltire in front of it, the hands bearing the stigmata, together constitute the distinctive insignia of the Franciscan Order known all over the world.