From Heraldry of the World
Your site history : Guelph Collegiate Vocational Institute
Jump to navigation Jump to search 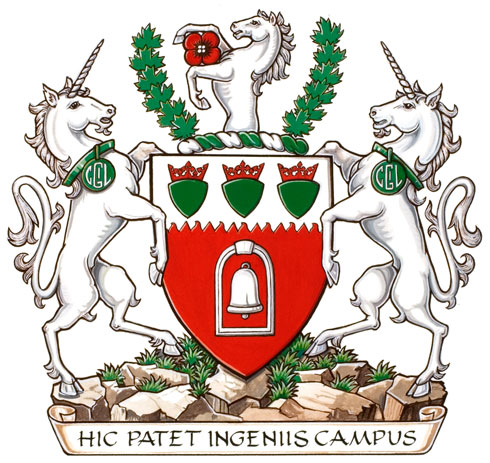 The shield is divided by a fluctuating line which represents a flame, a symbol traditionally representing the spirit of inspiration for education. The colours red and white in the lower part of the shield are the colours of the City of Guelph. The primary charge is a depiction of the school’s main entrance with its door open. It represents the invitation to engage in the opportunities that come from education, and is related to the motto. The bell within the stone arch and the arch itself represent previous historical buildings now incorporated into the present site’s main edifice. The arch became part of a ceremonial entranceway to the school’s auditorium, and the bell is rung on special ceremonial occasions. The repetition of the triangular charge three times in chief, akin to the Scottish custom of the chief of clan wearing three feathers, emphasizes that the school was designated as the chief school of the county.

The maple leaves come from the monogrammed device in use since the 1920s. The horse alludes to the one on the front of the school entrance. It holds a red poppy alluding to the city’s name as part of the school’s name, the city sometimes being known as “The poppy city,” alluding to John McCrae, an alumnus of the school, author of “In Flanders Fields.”

The unicorn represents ideas of Scotland and royalty, two being found as supporters of the arms of the King of Scotland. Its mythical characteristics of virtue and purity are inspirations and strengths for an educational body battling against its natural foe, ignorance. The emblems at their necks mark these unicorns as being specific to the school, showing the monogrammed disc bearing the letters GCVI. The Guelph limestone of the compartment is a type which naturally occurs in the Guelph area, and has been used to build many buildings from the 1840s.

The motto means “Here the field lies open to all talents.”