From Heraldry of the World
Your site history : Guy's Hospital
Jump to navigation Jump to search 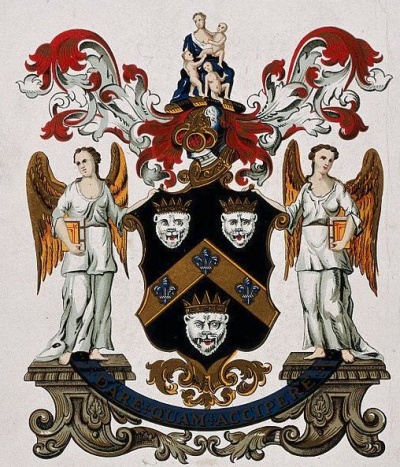 Arms : Sable, on a chevron Or between three leopards' heads argent, each crowned with an Eastern crown of the second, as many fleurs-de-lis azure.
Crest: On a wreath of the colours, A woman sitting accompanied with three children proper, habited azure, being the •emblem of Charity.
Supporters: On either side an angel proper, habited argent, the hair and wings Or, each holding a book proper, the clasps gold.
Motto: Dare quam accipere.

The arms were officially granted on May 24, 1725 to the Corporation for the Management and Disposition of the Charities of Thomas Guy of London.