From Heraldry of the World
Your site history : Hammersmith
Jump to navigation Jump to search 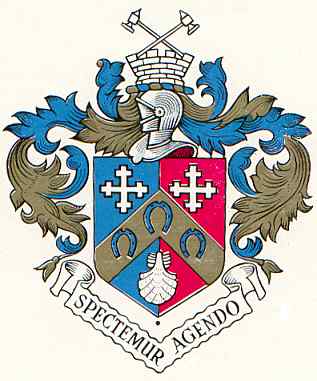 Arms : Per pale Azure and Gules on a Chevron Or between two cross Crosslets in chief and an Escallop in base Argent three Horseshoes of the first.
Crest : On a Wreath of the Colours upon the Battlements of a Tower two Hammers in saltire all proper.
Motto: 'SPECTEMUR AGENDO' - Let us be judged by our actions.

The arms were officially granted on December 23, 1897.

The emblems on the shield are from the arms of two benefactors to the borough. The cross-crosslets represent Edward Latymer, who, in 1626 left money in his will for the education of poor boys. The horseshoes represent Sir Nicholas Crisp (1598-1665), who contributed bricks and funds for the parish church. The scallop denoted George Pring who projected the Old Bridge, but died before it was finished. The hammers refer to the name.