From Heraldry of the World
Your site history : Harare
Jump to navigation Jump to search 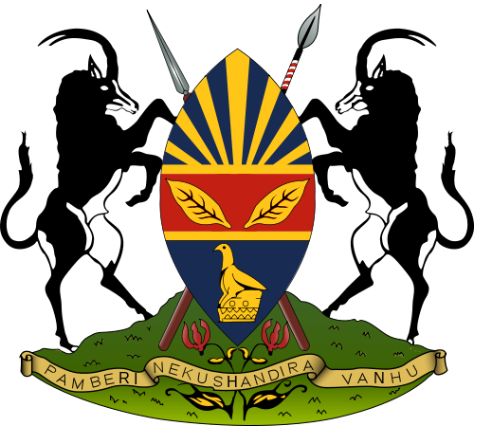 Arms : On an African war shield, Azure, seven piles conjoined at the fess point Or, overall a fess Gules fimbriated on the second charged with two tobacco leaves in bend and bend sinister respectively and in base a representation of the Zimbabwe Bird in Gold; behind the escutcheon a long pointed hunting spear in dexter and an oval headed war spear in sinister in saltire proper.
Supporters: On a mound Vert on either side a sable antelope proper and in base two Flame Lilies (Glorisa superba) in saltire proper.
Motto: "PAMBERI NEKUSHANDIRA VANHU" (Forward with Service to the People).

The arms are a traditional African war shield, with the tobacco leaves as a symbol for agriculture around Harare. The flames and the Zimbabwe bird represent the birth of a new nation. The antelopes are derived from the arms of Salisbury, see below.

The previous arms were granted to the city of (then) Salisbury in 1939.

The arms replaced an earlier unsuitable design (see below). The green field and corn represent agriculture, the gold bar represents gold mining, and the three roundels with fleur-de-lis are from the arms of the Cape Colony, from which the majority of the first pioneers came. The lion in the crest was adopted from the arms of Rhodes. The motto "Discrimine Salus" means "In Discrimination there is Safety", taken from the motto of the Traill family, from whom Fairbridge was descended, and refers to the careful selection of the site of Salisbury. 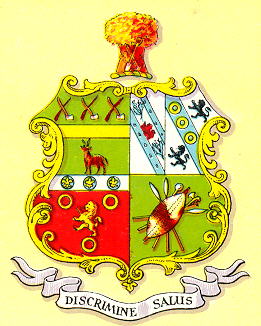