From Heraldry of the World
Your site history : Harris Manchester College (Oxford University)
Jump to navigation Jump to search 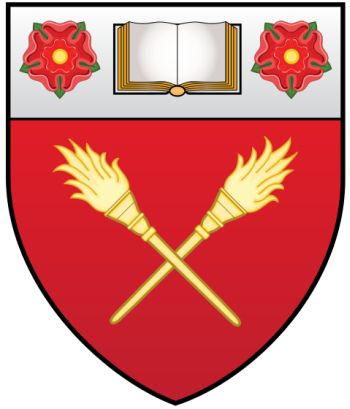 Arms : Gules, two torches inflamed in saltire proper; on a chief argent between two roses of the field, barbed and seeded, an open book also proper.
Crest: Issuant from a celestial crown Or, a demi heraldic antelope argent, armed, collared and chained, the chain reflexed over the back gold, charged on the shoulder with a rose as in the Arms.
Motto: Veritas, Libertas, Pietas.

If this text appears, it means that I have not yet had the time to add the information on these arms. Just Manchester College (Oxford University) mail me and I will add all information that I have !