From Heraldry of the World
Your site history : Harrods
Jump to navigation Jump to search 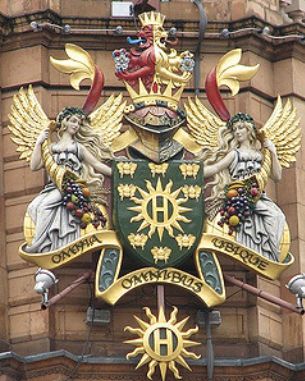 Arms: Vert within an Annulet irradiated Or two Pallets conjoined by a Bar all within an Orle of eight Bees Gold.
Crest: upon a Helm with a wreath Or and Vert issuant from an Eastern Crown Or charged in the centre with a sinister Hand apaume couped at the wrist Gules two demi-lions addorsed and conjoined the dexter Gules holding between the paws a Cinquefoil Argent the sinister Or holding a Rose Argent barbed and seeded proper their heads ensigned by a single Eastern Crown Gold. Mantled Gules doubled Or.
Supporters: on either side an Angel looking inwards proper vested Argent wings elevated crined and sitting upon a Terrestrial Globe Or wreathed about the temples with a Garland of leaves of the tea plant Vert supporting with the exterior hand a Cornucopia head downwards Gold disgorging the Fruits of the Earth proper.
Motto: 'Omnia Omnibus Ubique'.

The arms were officially granted on September 9, 1991.

The shield is coloured in the unique 'Harrods Green'. The Bees represent industry with 'H' for Harrods in an irradiated Annulet for the world and excellence.

Three generations of Burbridge, Baronets, were Managing Directors having been General Managers. Sir Woodman and Sir Richard II were also Chairmen before Hugh Fraser and the House of Fraser took over. They are represented in the Crest by the sinister red hand and the red lion of Scotland holding an Argent cinquefoil or Fraise meaning the flower of the strawberry plant found in the arms of various families of Fraser. The Golden lion holding a white rose is for England. The current Owners, the Egyptian Al-Fayed family are indicated by the Eastern Crowns.

The supporters Abundantia, the Goddess of Plenty sit on terrestrial globes and hold horns of plenty and are wreathed about the temples with leaves of the tea plant as the Harrods were originally tea merchants.

The motto 'Omnia Omnibus Ubique', can be translated as 'Everything for everyone, everywhere', has always been the stores claim.