From Heraldry of the World
Your site history : Harvard Law School
Jump to navigation Jump to search 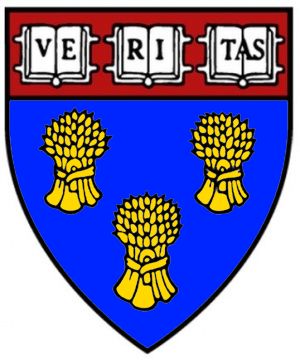 If you have any information on these arms Law School mail us !

In his will of 1779, Isaac Royall left land to Harvard College to establish the first professorship in law at the school. This bequest led to the founding of Harvard Law School in 1817. In 1936, to celebrate the university's tercentenary, Harvard alumnus and former English professor Pierre de Chaignon la Rose drew up what were referred to as 'seals' for each of Harvard's graduate schools. For Harvard Law School, la Rose adopted Royall's coat of arms, a blue shield with three sheaves of wheat under a chief of the arms of the University.

In 2016, the arms became the object of controversy due to Royall's slaveholding in Antigua, where he ordered 77 black enslaved persons to be burned alive, and several others quartered. Students under the name 'Royall Must Fall' campaigned to have the arms removed and issued an alternative seal showing slaves burdened by wheat sheaves (see below). After several incidents of unknown racial attacks within the Law School community Law School Dean Martha L. Minow was pressured by students to create a committee of students, faculty staff and alumni to recommend whether to change the arms. In 2016, the Law School officially decided to scrap the (use of the) arms.