From Heraldry of the World
Your site history : Haslingden
Jump to navigation Jump to search 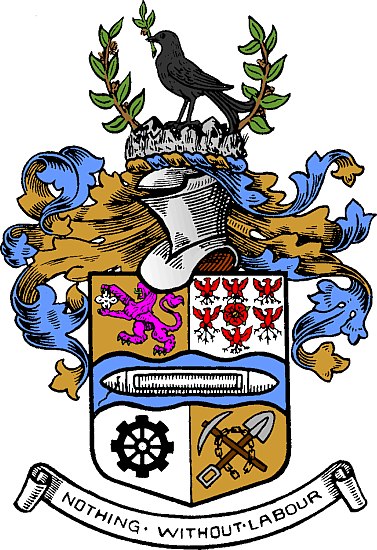 Arms : Quarterly Or and Argent on a Fesse wavy Azure between a Lion rampant Purpure holding between the paws a Cinquefoil Ermine in the first quarter six Eagles displayed three two and one Gules in the centre chief point a Rose of the last barbed and seeded proper in the second a Cogwheel Sable in the third a Pickaxe in bend surmounting a Spade in bend sinister entwined by a Chain in arch all proper in the fourth a Shuttle fessewise of the first tipped and furnished with the thread pendent of the second.
Crest : On a Wreath of the Colours upon a Mount a Rock thereon a Moorcock holding in the beak a Sprig of Hazel between two Branches of Hazel fructed all proper.
Motto: 'NOTHING WITHOUT LABOUR'

The fess and lower part of the arms show symbols of the town's industry - a weaving shuttle, a cogwheel, a miner's pick and spade and a length of chain. The top of the shield has features from the arms of local families and the red rose of Lancashire.

The dove in the crest is holding a branch of hazel, in reference to the town's name.