From Heraldry of the World
Your site history : Hayling College
Jump to navigation Jump to search 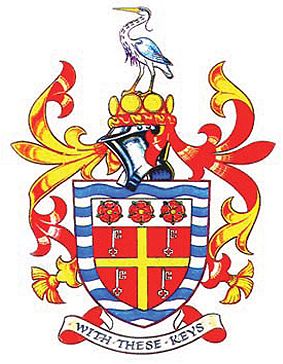 Arms: Gules, a cross Or between four keys erect, wards to the sinister, argent, on a chief argent three roses gules, barbed and seeded proper; a bordure barry wavy argent and azure.
Crest: On a wreath of the colours, In front of a rock Or, perched thereon a heron proper, four bezants.
Motto: With these keys.

The arms were officially granted on December 20, 1968 to the Hayling Island county secondary school

The gold cross represent the Island’s link with Jumieges Abbey in Normandy. Queen Emma, daughter of Robert I of Normandy, second wife of the English Saxon king, Ethelred the Unready and great-aunt of William the Conqueror, once owned roughly half of Hayling. It was part of her dower. The other approximate half was held by the Abbey of Jumieges. Ten monks from Jumieges, led by their prior, lived in the Manor House and collected the tithes from Hayling which were sent back to the mother Abbey.

The Four Keys represent the districts of Hayling - Eastoke, Mengham, Northney and West Town. They also link with the motto -'With These Keys'. Education being the key to success in life.

The Three Red Roses represent the then three schools which were on Hayling Island and the Red Rose of Hampshire.

The Wavy Border of the Shield represents Hayling as an Island. It is also reminiscent of the floods which swept away four-fifths of Hayling in the 12th Century.

The Heron represents Tournerbury Woods, which was a heronry in Roman times.

The Bezants on a Rock recall the smugglers of 1800 bringing contraband from France. This continued throughout the Napoleonic wars. The boats had ropes passing underneath them from where the barrels of illicit goods were slung out of sight of the patrolling excise men.

Literature: Image and information from http://www.hayling.hants.sch.uk/college-coat-of-arms