From Heraldry of the World
Your site history : Heath Scott
Jump to navigation Jump to search 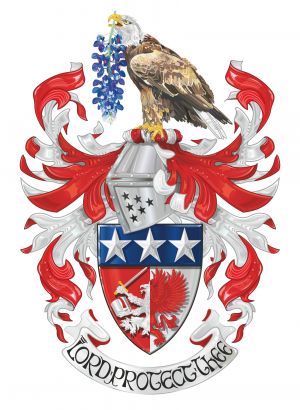 Per pale Gules and Argent, a griffin segreant counterchanged grasping with the dexter foreclaws a sword Argent hilted and pommelled Or and in the sinister foreclaws an open book Argent bookmarked Gules, on a chief Azure three mullets Argent.

The Bald Eagle is the official bird of the United States; within its beak is a bluebonnet, the official flower of Texas. The crest represents the armiger’s pride and loyalty to state and country.

The colours and layout of the shield reflect the flag of Texas. Having received a land grant from the Republic of Texas, the armiger’s ancestor, Thomas Scott, arrived in 1836 and the family has remained in the State ever since. The stars on the shield represent the Scott family’s residence in Texas in the 19th, 20th, and 21st centuries.