From Heraldry of the World
Your site history : Hemsworth
Jump to navigation Jump to search 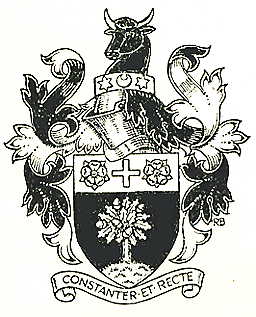 I have no coloured image of these arms. Any better image is welcome !

Arms : Sable on a Mount in base an Oak Tree proper fructed Or on a Chief Gules a Cross couped Gold between two Roses Argent barbed and seeded also proper.
Crest : Out of a Circlet Azure charged with a Crescent Argent between two Mullets of six points Or a Bull's Head Sable armed Gold; Mantled Sable doubled Or.
Motto: 'CONSTANTER ET RECTE' - Steadfastly and justly

The black background is an allusion to the local coal-mining industry and the oak tree on a green mount represents the rural portions of the district, especially Brierley Common and the famous "Old Adam" oak. The white roses on red denote a situation in Yorkshire, while the gold cross repre­sents the Wapentake of Osgoldcross being "Oswald's Gold Cross" from the ancient arms of Nostell Priory. The two roses can also be under­stood to have reference to the wapentakes of Strafford and Tickhill.

The motto is part of that of the Warde-Aldam family of Frickley and Hooton Pagnell.