From Heraldry of the World
Your site history : Heraldry Society of Australia
Jump to navigation Jump to search 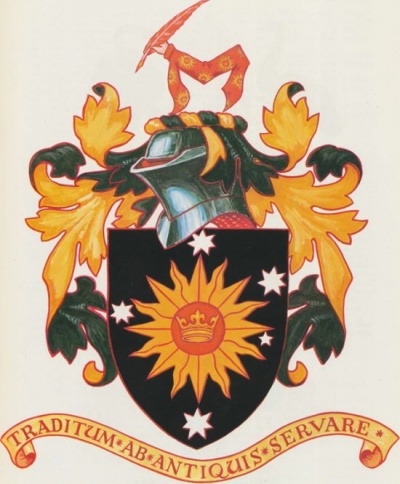 Arms : Sable, within a representation of the Southern Cross composed of five Mullets Argent, upon a Sun Gules radiated Or an Antique Crown Or.
Crest : On a Wreath Or and Sable, a Cubit Arm couped bendwise habited in a Maunch Gules semy of Suns Gules irradiated and charged with an Antique Crown Or, the hand proper holding a Quill Pen Gules tipped Or.
Motto: 'Traditum ab Antiquis Servare'.

The arms were officially granted on December 30, 1969.

If you have any information on these arms Society of Australia mail us !