From Heraldry of the World
Your site history : Hereford
Jump to navigation Jump to search 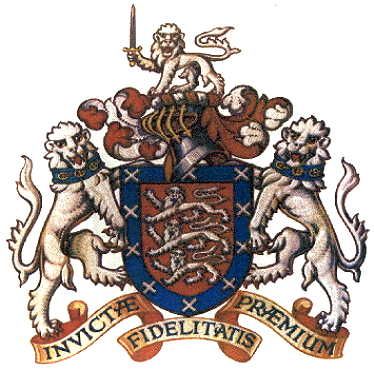 Arms : Gules three Lions passant guardant in pale Argent on a Bordure Azure ten Saltires of the second.
Crest : On a Wreath of the Colours a Lion passant guardant Argent holding in the dexter paw a Sword erect proper hilt and pomel Or.
Supporters : On either side a Lion ram­pant guardant Argent gorged with a Collar Azure charged with three Buckles Or.
Motto: 'INVICTAE FIDELITATIS PRAEMIUM' - Reward for faithfulness unconquered.

The arms were recorded (without bordure) at the Visitations of 1569 and 1634, augmented with crest and supporters on September 14, 1645.

Hereford bore on an early seal the Royal Arms of Richard I, who gave the City its first Royal Charter in 1189. It seems to have coloured the lions silver for the purpose of creating a distinctive (but unauthorized) coat of arms. The entire remainder of the design dates from 1645.

The City of Hereford supported the King during the civil war at the time and was garrisoned by Royalist troops. The garrison was very small and a large force of Scottish troops under the command of Leslie, Earl of Leven, arrived in Hereford. However, the citizens of Hereford joined with the soldiers and did the duties of soldiers so nobly that they kept the Cromwellian troops at bay for approximately five weeks. At the end of five weeks, the Scots gave up trying to capture the City and left. Leaving the Royal Standard flying in triumph over the City. King Charles I, on hearing of this was delighted and full of praise for the citizens of Hereford. He visited the City in order to thank them personally for their success. He dined one night at the Bishop's Palace and at the end of this dinner he is alleged to have made the Grant of Arms, which has resulted in the Coat of Arms, which the City of Hereford now possesses.

The lions surrounded by saltires, or St Andrew's Crosses, represent the Royalist forces hemmed in by the insurgent Scots, and the buckles on the collars of the supporting lions are from the arms of the Earl of Leven.

The lion and sword of the crest signify loyalty to and defense of the Crown, and is rare in civic heraldry. Of even greater rarity is the barred peer's helm supporting the crest found only in the arms of one other municipal authority in England – The City of London. King Charles I also gave the motto.

The arms were continued in 1998 by the Parish Council, which was re-establised as a City Council in 2000.