From Heraldry of the World
Your site history : Hertford College (Oxford University)
Jump to navigation Jump to search 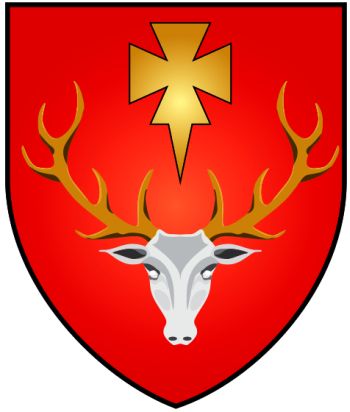 Gules, a stag's head caboshed argent, attired or, between the attires a cross pattee fitched at the foot of the last.

Hart Hall was founded in 1282 by Elias de Hertford and the arms of Hertford College, gules, a stag's head caboshed argent, attired or, and between the horns a cross patty fitched at the foot of the last were taken from those appearing on the seal of the founder of Hart Hall. The Hall became a part of Exeter College until in 1740 an enterprising don succeeded in obtaining a charter making the Hall into an independent College. However, sixty years later there was only one fellow left and as the buildings collapsed the College died until it was resurrected and established by Act of Parliament in 1874 as Hertford College.