From Heraldry of the World
Your site history : Hessen
Jump to navigation Jump to search 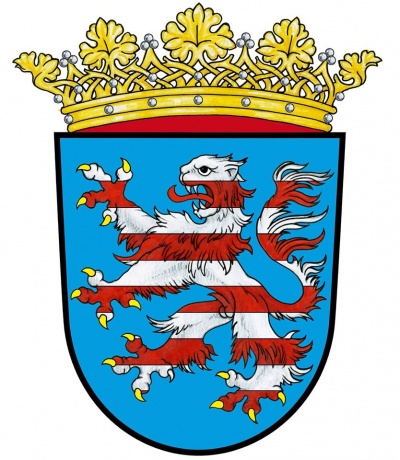 Hessen at present is one of the States of Germany, but has a rather complicated history.

The present arms show the lion of the arms of the Counts of Hessen and Thüringen and were officially adopted in 1949.

The Counts of Hessen descended from the Counts of Thüringen and both Hessen and Thüringen use the barred (barred) lion in their arms. The lion has been used by the counts of Thüringen from the end of the 12th century. One of the oldest known seals shows the barred lion as well as the cross of the German Order (see below). The bars differed between the centuries, but in the 15th century the present number and order (upper one is silver) were determined. In all later arms of Hessen the lion was present.

Hessen was split in 1567 in the (Grand-)Duchies of Hessen-Darmstadt and Hessen(-Kassel).

The lion was used as the sole symbol in the arms of the Grand-Duchy Hessen-Darmstadt one of the major predescessors of the present state. The arms, used from 1808-1902, showed the lion holding a sword. The sword was taken from the old medieval title of the counts as ' Defenders between Rhine and Weser'. The arms were crowned and placed on a Royal Mantle of ermine. Around the shield the chains of the Order of Ludwig and the Order of the Golden Lion were placed. (see below). The arms were somewhat simplified in 1902, but the lion with the sword was still the only figure on the shield.

The arms of the Grand-Dukes, however, were much more complicated, see below.

The Principality of Hessen was abandoned after 1918, and transformed in the semi-independent People's State (Volksstaat). This State used the same arms as the present State of Hessen.

The arms of the Prussian Province of Hessen-Nassau were granted in 1892 and were a combination of the arms of three old territories. It showed the lions of Hessen and Nassau as well as the eagle of the city of Frankfurt am Main. As in all Prussian provincial arms, the supporters of the kingdom of Prussia could be used.