From Heraldry of the World
Your site history : Hillfield Strathallan College
Jump to navigation Jump to search 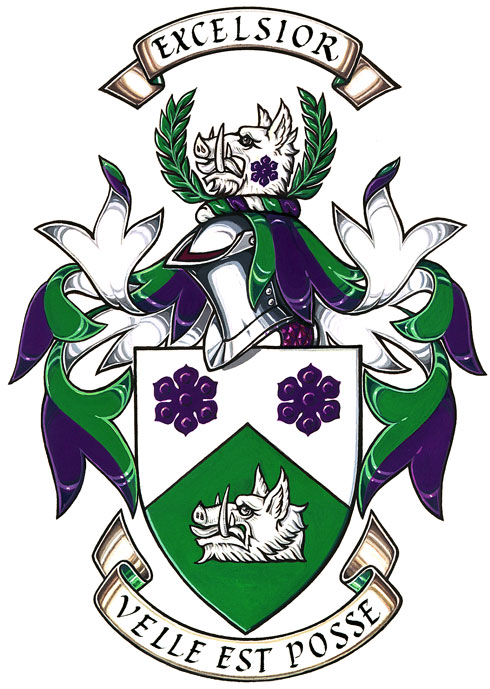 Arms : Per chevron Argent and Vert, in chief two sexfoils Purpure, in base a boar’s head couped Argent
Crest : A boar’s head Argent charged with a sexfoil Purpure and encircled by a wreath of laurel Vert
Supporters :
Mottoes : VELLE EST POSSE and EXCELSIOR

The boar's head was the symbol of Hillfield School, and was likely taken from the personal arms of Lord Aberdeen, Governor General of Canada and an early patron of the school. The flowers, which may have been based on prairie crocus flowers, and the purple colour were used by Strathallan School, along with the colour green, which was also used by Hillfield. Green, purple and white are the colours of the present school. The chevron division alludes to Hamilton Mountain, the school's location.

The crest combines the Hillfield and Strathallan symbols, with the addition of a green laurel wreath, an ancient symbol of excellence and achievement, which had also been used by Hillfield School.

The motto VELLE EST POSSE ("To wish is to be able") was the Hillfield motto, the motto EXCELSIOR ("Ever higher") was the motto of Strathallan.