From Heraldry of the World
Your site history : Hof (Bayern)
Jump to navigation Jump to search 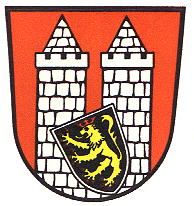 Hof probably received city rights around 1250. In 1260 it was mentioned as a city. The oldest seal, however, is known from 1335, but dates from the late 13th century. The seal already showed a castle with a (large) shield with a lion. The lion is the arms of the Lords of Weida, ruling over Hof as vassals of the Dukes of Bavaria.

A later seal, known from 1400, shows the same composition. All smaller seals until the late 18th century only showed the arms with the lion, without the castle. These arms were also considered the real arms of the city. On the great-seals of the city, on the other hand, the arms were augmented with many attributes.

On the great seal of 1571 the arms (with castle) are shown with two savages as supporters, and the arms were placed on a small hill, with the river Saale shown on the hill. In 1581 an angel is added as an additional supporter above the shield.

Later images most often showed the savages, the other attributes were no longer used regularly. The great arms were officially approved in 1819, but in 1840 the arms seem to have changed again. In the mayor's chain of 1840 the arms with the supporters are placed in a shield, covered with a mural crown. The real arms only showed a lion, no castle anymore.

In 1841 the arms of 1819 were again granted by the Bavarian King Ludwig I, being the present arms with savages and angel. The angel and supporters were officially removed in 1960.