From Heraldry of the World
Your site history : Honourable Artillery Company
Jump to navigation Jump to search 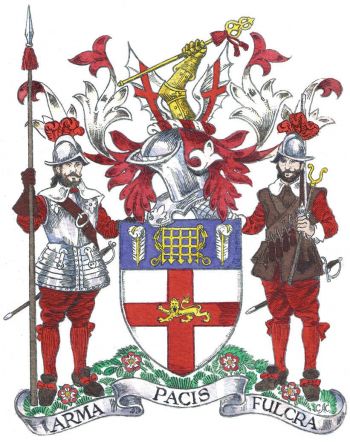 Arms: Argent, a cross gules (being that of St. George) charged with a lion passant guardant Or (being part of the Royal Arms of England); on a chief azure a portcullis of the third between two ostrich feathers erect of the field.
Crest: On a wreath of the colours, A dexter arm embowed in armour, the gauntlet grasping a pike in bend sinister Or, between two dragons' wings argent each charged with a cross gules.
Supporters: On the dexter side a pikeman, armed and accoutred, supporting with the exterior hand a pike erect proper; and on the sinister side a musketeer with his matchlock, bandoleers and rest, all proper.
Motto: Arma pacis fulcra

The oldest known use of arms for the company dates from 1538 and these arms show a Cross of St. George with a lion passant of England. The company was a successor of the old Guild of St. George, which explains the cross. It is not sure whether the arms were part of the Charter of 1537.

The chief and crest were probably added in the early 17th century, but there is no record of a charter or grant. The chief shows a portcullis and two ostrich feathers, both were royal badges, but the portcullis may also refer to the city if Westminster. The crest is clearly derived from the arm of the city of London. The arms with the pike refers to infantry (contrary to the name, the guild was for soldiers with "Longbowes, Crossbowes and Handeyarmes").