From Heraldry of the World
Your site history : Humber Institute of Technology and Advanced Learning
Jump to navigation Jump to search 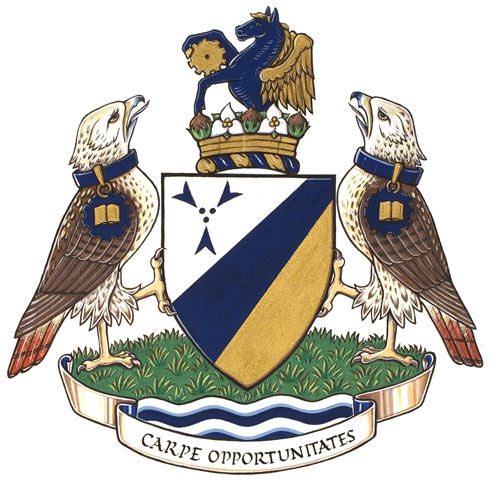 Arms : Per bend sinister Argent and Or, a pile reversed issuant from the dexter flank and truncated in chief, in dexter chief three ermine spots in pairle Azure
Crest : Issuant from a circlet Or the upper rim set with hazelnuts and trillium flowers proper a demi Pegasus Azure crined, winged, unguled and holding between its legs a cogwheel Or
Supporters : Two red-tailed hawks proper each gorged with a collar pendent therefrom a cogwheel Azure charged with an open book Or, standing on a grassy mound Vert above barry wavy Argent and Azure
Motto: CARPE OPPORTUNITATES

The arms were officially granted on September 15, 2005.

The arms are based on the symbol used by Humber since December 2000, and incorporate colours of blue and gold. The name “Humber” is taken from the river of that name, represented here by the blue pile, giving a perspective look that reflects the sense of a clear, contemporary pathway to achieving one’s goals, some of which might lie beyond the horizon. The ermine spots represent the idea of excellence, the fur being esteemed in history. The three together also represent the flowing together of different treatments of post-secondary education. Here, the theme is that Humber provides excellent leadership and direction, balancing history with innovation.

The coronet showing the trillium, the provincial flower, alternating with the hazelnut, a floral symbol of wisdom, is one that is seen with the arms of educational bodies in Ontario. Pegasus, whose name means “Springs of oceans”, comes from Greek mythology. He was raised by the Muses and is associated with poetic inspiration. Pegasus with the cogwheel, symbolic of technology, portrays the idea of inspiration being the source that motivates one to apply one’s skills and produce a result, rather than leave the idea only in one’s mind.

The red-tailed hawks supporting the shield are used in honour of the name used by the student athletic teams at Humber. The open books on the cogwheels symbolize the notion that knowledge is available to all, and that the students will take their learning with them through their lives. The joined symbol of book and cogwheel is another way to portray the idea of inspiration. The wavy bars represent the Humber River, from which Humber takes its name.

The motto means “Seize the opportunities.”