From Heraldry of the World
Your site history : Huron University College
Jump to navigation Jump to search 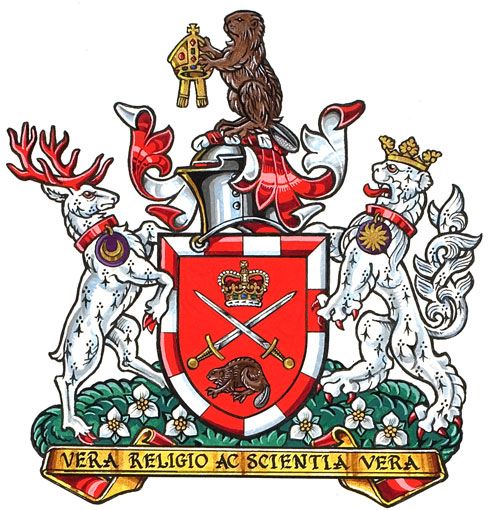 The shield contains the arms of the Anglican Bishop of Huron. It is differenced with a border.

The beaver is the ancient totem animal of the Huron First Nation and appears in the arms of the Bishopric of Huron. The mitre was an original emblem of the college.

The roundels worn by the supporters are in the college colours. The stag, furred ermine for balance, with the crescent, alludes to the arms used by Bishop Benjamin Cronyn, founder of the college. A stag also appears in the arms of the University of Western Ontario for which Huron was the founding college.
The double-tailed ermine lion is a reference to the Reverend Alfred Peache who provided funds to establish Huron College. It also appears in the arms of the University of Western Ontario. The roundel borne by the lion displays a twelve-pointed estoile alluding to the arms of Lieutenant Governor John Graves Simcoe and honouring his daughters who played a significant role in supporting the development of the college. The star is the polar star, a guiding light.
The lion and estoile further represent the continual support that the clergy and laity have provided over 140 years of the college’s existence.

The supporters stand on a green mound strewn with trillium flowers, for Ontario.

Literature: Image and information from http://www.gg.ca