From Heraldry of the World
Your site history : Imperial Tobacco Company
Jump to navigation Jump to search 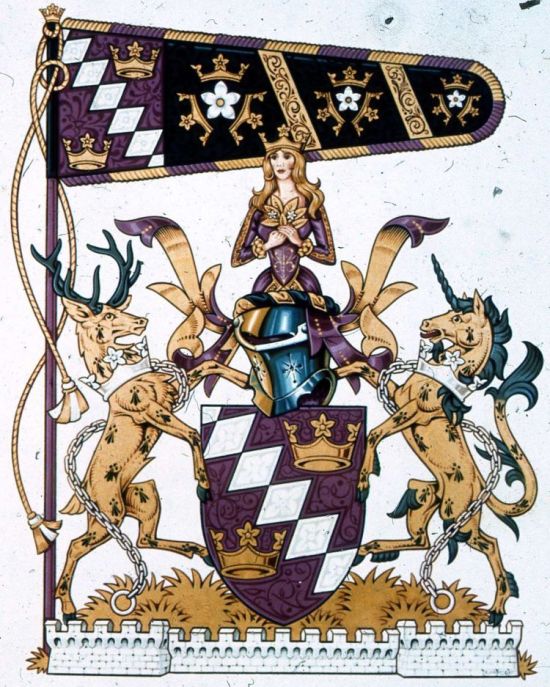 Arms: Purpure, a bend lozengy argent, between two coronets composed of four tobacco flowers raised on points above a rim Or.
Crest: On a wreath Or and sable, a demi maiden affronty proper, crowned with a like coronet, vested purpure, garnished and holding before her a bunch of tobacco plants Or, flowered argent. Mantled purpure doubled Or.
Supporters: On the dexter a stag and on the sinister a unicorn, both erminois, attired unguled horned and armed, the unicorn also tufted, sable, and both gorged with coronets as in the arms argent, attached thereto chains reflexed over their backs also argent, standing upon a grassy mount Or, contained by an embattled wall argent.

The arms were officially granted in 1974.

The basic colours are purple and gold — imperial colours, rich and excellent. The bend of silver lozenges is a reference to the arms of Sir Walter Raleigh and refers to the fact that it was probably due to Raleigh's use of his Patent to take possession of certain unknown lands in America that tobacco was introduced into England. In any case, Raleigh is immortalised in the popular mind as the father of tobacco smoking in this country. The golden coronet has been specially designed for Imperial Tobacco and is unique. For this reason the coronet not only features prominently in the arms but elsewhere in the achievement.

The crest refers to Virginia, the principal home of tobacco growing. The crest which was designed for the Company of Virginia Merchants, apparently never granted (the Company was dissolved in 1624) but was subsequently used by the royal colony erected by James I, consisted of a demi-virgin an allusion to the virgin Queen Elizabeth, from whom the area was named. The crest of Imperial Tobacco Ltd is a like virgin but crowned with the special coronet, habited in the livery colours and holding a bunch of tobacco flowers. Not only is the crest an historical allusion, a direct reference to Virginia tobacco but a virgin is herself a symbol of purity and excellence.

The supporters refer to the two principal cities with which Imperial Tobacco is connected. The arms of Bristol are supported by two unicorns, whilst stags support those of Nottingham. Imperial Tobacco has captured one beast from each city and harnessed it to its use with coronet and chain. It has also made the beasts its own making them erminois. This fur is a variant of ermine, itself a royal fur, where gold replaces the white signifying minever. It is the ultimate symbol of all that is rich, excellent and of the very highest quality. The supporters stand on a length of wall terminating in two towers, representing the two cities.