Your site history : Institute of Financial Accountants
Jump to navigation Jump to search 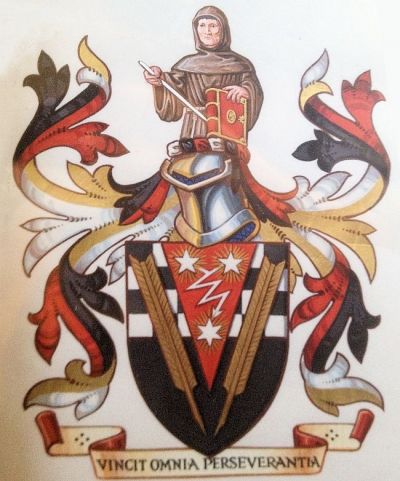 Arms : Per fess cheeky sable and argent and sable, on a pile gules between two quill pens palewise Or two mullets argent, irradiated Or, issuing from those in chief a lightning flash argent, in base a mullet of six points also argent, irradiated Or.
Crest: On a wreath argent, sable and gules, A demi figure garbed as a Franciscan representing Fra Luca Paciol resting the sinister hand on a book bound gules, edged, clasped and garnished Or, al)d pointing thereto with a wand proper held in the dexter hand. Mantled sable and gules, doubled Or.
Motto: Vincit omnia perseverantia

The arms were officially granted on February 20, 1969 to the Institute of Book-keepers and Related Data Processing.

The arms have deep significance in that, not only do they have representations of the Exchequer, ledgers, pens and guardians of treasure, but also "The Father of Accounting." Luca Pacioli was born in Sansepulcro in Tuscany, probably during 1445, to a poor family. His future seemed very unpromising but he joined a Franciscan monastery in Sansepulcro and became an apprentice to a local businessman. The young Pacioli had always loved mathematics and he soon abandoned his apprenticeship to work as a mathematics scholar. The year 1494 is the only date during his life that is absolutely certain. It was during this year that theforty-nineyear- old Pacioli published his famous book Summa de arithmetica, geometria, proportioni et proportionalita (The Collected Knowledge of Arithmetic, Geometry, Proportion and Proportionality). Pacioli wrote the Summa in an attempt to redress the poor state of mathematics teaching attempt to redress the poor state of mathematics teaching in his time. One section in the book made Pacioli famous. The section was Particularis de Computis et Scripturis, a treatise on accounting. Pacioli was the first person to describe double-entry accounting, also known as the Venetian method. This new system was state-of- the-art, and revolutionized economy and business. The Summa made Pacioli a celebrity and insured him a place in history, as "The Father of Accounting." It was the most widely read mathematical work in all of Italy, and became one of the first books published on the Gutenberg press.

Literature : image and info from https://www.theheraldrysociety.com/