From Heraldry of the World
Your site history : Institute of Brewing
Jump to navigation Jump to search 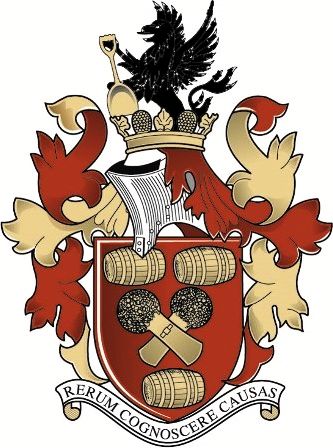 Arms : Gules, two garbs of barley in saltire between three tuns fessewise Or.
Crest: Issuant out of a coronet composed of four hop cones and as many hop leaves alternately set upon a rim Or, a demi griffin sable supporting a malt shovel gold.
Motto: Rerum cog­ noscere causas

The arms were officially granted on January 5, 1928.

If you have any information on these arms of Brewing mail us !

The current Institute of Brewing and Distilling uses the same arms, but with a silver griffin in the crest.