From Heraldry of the World
(Redirected from Institute of Builders)

Your site history : Chartered Institute of Building
Jump to navigation Jump to search 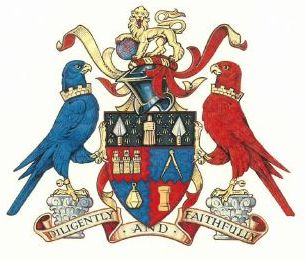 Arms : Quarterly indented gules and azure, in the first quarter a triple towered castle, in the second quarter a pair of compasses extended points downwards, in the third quarter a plummet, and in the fourth quarter a hammer-head palewise, all Or; on a chief pean a brush, the handle upwards, also Or between two trowels, points upwards, argent, the handles gold.
Crest: On a wreath of the colours, A lion passant guardant Or resting the dexter fore paw on a terrestrial globe proper.
Motto: Diligently and faithfully

The arms were officially granted on November 38, 1934. Supporters granted on ??

If you have any information on these arms Institute of Building mail us !