From Heraldry of the World
Your site history : Institute of Chartered Accountants Australia
Jump to navigation Jump to search 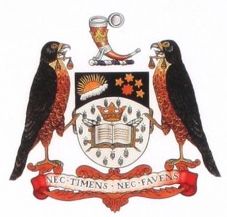 Arms : Ermine, two pens in sal tire surmounted by an open Book proper in chief an open Crown Or, on a Chief arched per pale Azure and Sable to the dexter a Rising Sun issuing from a bank of Clouds also proper, and to the sinister five Stars Or representing the constellation of the Southern Cross.
Crest : On a Wreath of the Colours an ancient Ink-horn proper, encircled by an open Crown Or, the lid raised.
Supporters : On either side an Australian Pere­grine proper, holding in the beak a pair of Balances Or.
Motto: 'Nec Timens Nec Favens'.

If you have any information on these arms of Chartered Accountants Australia mail us !

The motto means : Without Fear or Favour