From Heraldry of the World
Your site history : Institute of Estate Agents of South Africa
Jump to navigation Jump to search 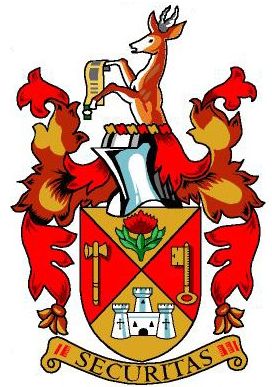 A shield supporting a knight's helmet in grey, black and white and surrounded by an ornamental embellishment in red, brown and gold. The shield is divided diagonally into four sections. In the left and right sections on a red background appear respectively representations in gold and black of a gavel and a key. In the upper and lower sections on a golden background appear respectively representations of a wattle flower in red and brown with green leaves and a three-towered castle in black, white and grey. Above the helmet rests a demi-springbok supporting with its right fore-leg a representation of a deed of sale in white and brown with red seal and green ribbon. Underneath the shield is a scroll in gold bordered brown bearing the motto SECURITAS in black lettering.

The arms were officially granted on November 3, 1950.

If you have any information on these arms of Estate Agents of South Africa mail us !