From Heraldry of the World
Your site history : Institute of Groundsmanship
Jump to navigation Jump to search 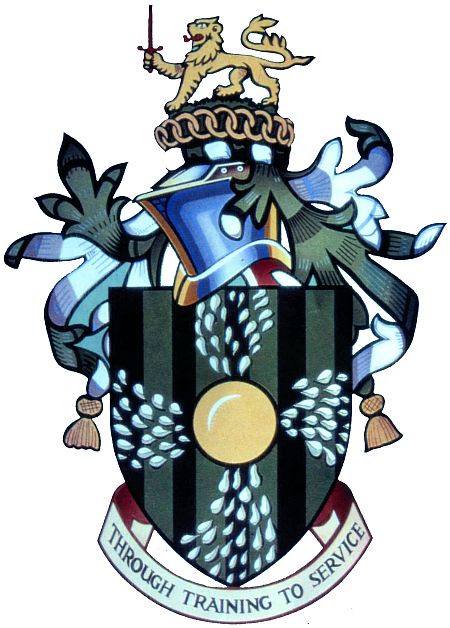 Arms : Vert gutty in cross formy throughout the limbs enarched clockwise Argent a Bezant in fesspoint.
Crest: on a wreath of the colours Issuant from a circlet of Annulets interlaced on a mount Vert thereon a Lion passant Or holding in the dexter fore paw a Sword erect Gules.
Motto: 'Through Training to Service'.

The field, in two shades of green, alludes to the turf of many varieties of playing fields which the Institute's members care for. The Bezant symbolises the golden ball of all games and the cross of white droplets refers to the ordered watering of the grounds. The bezant can also be taken to represent the sun which is the source of heat and thus of all energy which, when combined with water can be taken to symbolise tremendous and controlled power. Thus we have the perfect turf, games and controlled energy.

The interlaced annulets of the crest symbolise the many overseas members all working together and in harmony thus forming a strong and harmonious bond. The mount Vert echoes the green turf in the Arms. The Lion is a Lion of England and the red sword is taken from the arms of London.