From Heraldry of the World
Your site history : Institute of Quarrying
Jump to navigation Jump to search 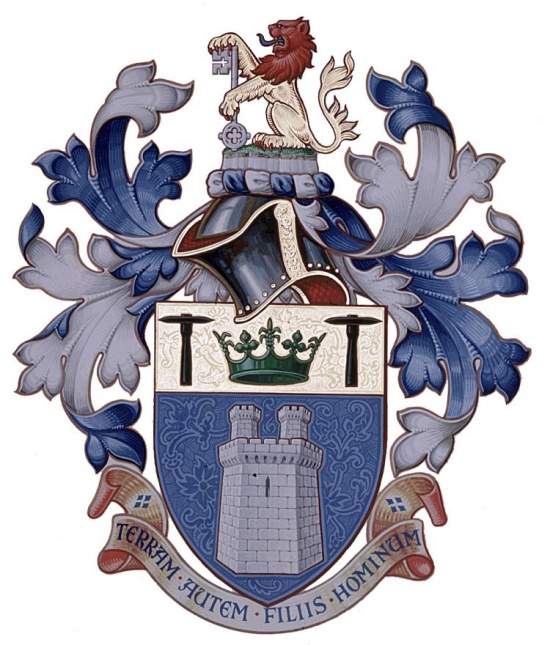 Arms : Azure, an octagonal tower of Caernarvon Castle with two turrets proper; on a chief Or between two quarryers' jads sable a coronet composed of wattle­ flowers and trefoils alternately set upon a rim vert.
Crest: On a wreath argent and azure, On top of a quarry face proper, a lion sejant erect Or, the head and mane gules, supporting between the forelegs a key erect, wards outwards, argent.
Motto: Terram autem filiis hominum

The arms symbolises the origin, aims and scope of the Institute. The octagonal stone tower on the shield is in the style of Caernarfon castle, the town of the Institute's birth. The two hammers or jads represent the ancient tools of the trade and the coronet in between is composed of wattle flowers to reflect the link with Australia and the trefoil, or shamrock, with Ireland.

The crest shows a quarry face with green-topped overburden surmounted by the lion of Scotland and in its paws is the key which is recorded as symbolising knowledge and freedom, although it it is also representative of the Institute's commitment to safety.

The latin motto Terram autem filiis hominum was inspired by a quotation from Psalm 115 which reads: 'The heaven, even the heavens, are the Lord's, but the earth he hath given to the children of men.' However, a more meaningful translation is the fruits of the earth for the children of men.