From Heraldry of the World
Your site history : Institute of Traffic Accident Investigators
Jump to navigation Jump to search 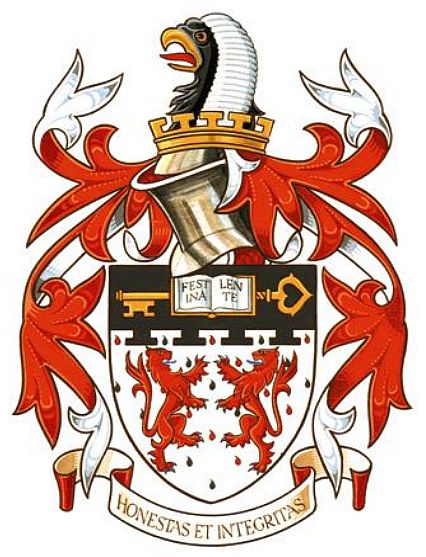 The arms were officially granted in 1997.

The gouttes represent drops of blood and oil often found at the scene of a road traffic accident, and the two lions combatant represent how some drivers are also found. They also represent the'combat' through the Courts, both criminal and civil.

The field of the shield represents a concrete surface, and the Sable chief a tarmacadam road surface. The potenty line of division represents the manner in which a single tyre mark is shown on a plan, which is two broken lines drawn thus. The key is to indicate that an investigation is the'key'to finding out the truth as to what exactly happened, and the book represents both the amount of study required and the actual report. The words Festina lente on the book, translated mean 'Hasten slowly', a requisite for all forensic investigation. The ward of the key reflects the potenty partition line of the chief.

The crest represents the 'eagle' eye of the investigator and the wig - justice.

The motto means 'Honesty and Integrity.