From Heraldry of the World
Your site history : Institute of Works Managers
Jump to navigation Jump to search 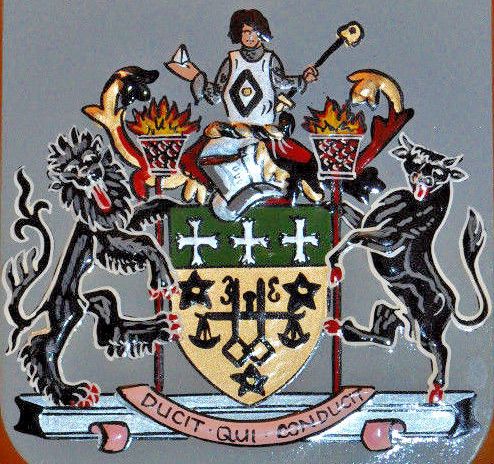 Arms : Or, a pair of scales surmounted of a pair of keys addorsed, bows interlaced in base, between three pierced mullets sable; on a chief vert three crosses patonce argent.
Crest: On a wreath of the colours, A demi man in mail, the coif and mittens loose, proper, with a surcoat argent, thereon framed within a mascle sable, a sun in splen­ dour throughout Or, holding in the dexter hand a pyramid argent, masoned sable, and the sinister supporting by the scabbard a sheathed sword also sable, garnished, hilt, pommel and quillons gold, the pommel resting on his hip. Mantled gules and sable, doubled Or.
Supporters: On the dexter side a lion guardant sable, and on the sinister. side a bull guardant also sable, unguled gules, and supporting a cresset, the basketwork fretty also sable, studded Or, enftamed proper, the pole gules, ferruled also sable.
Motto: Ducit qui conducit

If you have any information on these arms of Works Managers mail us !