From Heraldry of the World
Your site history : Institution of Chemical Engineers
Jump to navigation Jump to search 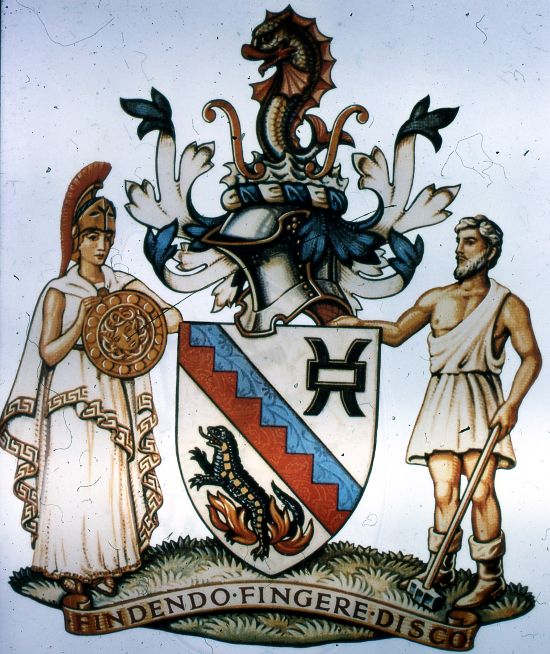 Arms : Argent, a bend per bend indented azure and gules between in chief a millrind sable and in base a salamander sable in flames proper.
Crest: On a wreath of the colours, Issuant from waves of the sea proper a dolphin erect vert, finned and bearded gules, between two long S's, being the mathematical sigxis of an integral, the dexter sign contoumee Or.
Supporters: On the dexter side a figure representing Pal!as Athene proper, and on the sinister side a figure representing Hephaestus proper.
Motto: Findendo fingere disco

The shield is divided into two parts to represent the profession as a whole and the special part played by chemical engineering. The indentations on the bend signify the cascade nature of many chemical engineering processes. The salamander represents the 'fiery' arts of chemistry (the crucible of medieval extractive metallurgy was called a salamander), while a millrind is symbolic of engineering — corn milling being a most ancient continuous process.

The heraldic dolphin in the crest is a symbol of the intellectual nature of chemical engineering and its connection with motion in fluids, while the integral signs illustrate the essential partnership with mathematics.