From Heraldry of the World
Your site history : Institution of Gas Engineers
Jump to navigation Jump to search 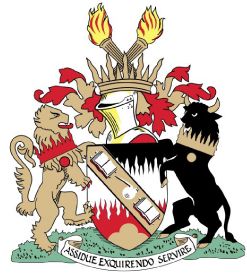 Arms : Per fesse sable and gules, a fess rayonee argent, in base a mount issuant Or; over all a bend also Or charged with a retort between two open books proper, edged and bound and clasped gules.
Crest: lssuant from a circlet rayonee, two torches in saltire Or inflamed proper.
Supporters: On the dexter side a lion Or gorged with a circlet rayonnee gules and charged on the shoulder with a torteau, and on the sinister side a bull sable, armed, unguled and gorged with a circlet rayonee Or and charged on the shoulder with a bezant.
Motto: Assidue exquirendo servire.

If you have any information on these arms of Gas Engineers mail us !