Institution of Mining and Metallurgy

From Heraldry of the World
Your site history : Institution of Mining and Metallurgy
Jump to navigation Jump to search

INSTITUTION OF MINING AND METALLURGY 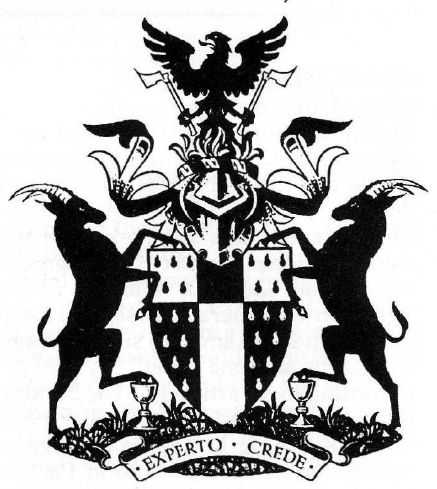 Arms : Sable a Chief Or all Gutty counter changed overall a Vale sans Gouttes also counterchanged.
Crest: upon a Helm with a Wreath of the colours an Eagle displayed Sable issuing from Flames proper and holding in each claw a Bavarian Ceremonial Miners Axe Gold.
Supporters: Upon a Compartment consisting of a grassy mount proper on either side an Antelope Sable armed unguled and resting the interior hindfoot on a Chalice Gold.
Motto: "Experto Crede".

The arms were officially granted on February 9, 1991.

The shield suggests a mine shaft and the contrast between darkness and light, also symbolising the extraction of precious metals from the dark earth. The droplets are also suggestive of molten metal.

The motto can be translated as "Believe one who has had experience in the matter".