From Heraldry of the World
Your site history : Isle of Man
Jump to navigation Jump to search 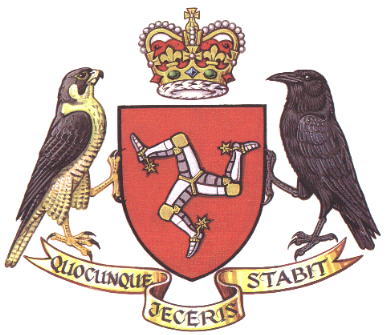 Arms: Gules, three legs in armour reflexed in triangle and conjoined at the thigh Argent and garnished and spurred gold.
Supporters : a Peregrine Falcon and a Raven both proper
Motto: Quocunque Jeceris Stabit

The Isle of Man lies about 20 miles west of the English coast of Lancashire and south of Cumbria. However, it is not part of England or the United Kingdom (although listed here for practical purposes). It is an internally self-governing dependency. Head of State is the Monarch of the United Kingdom, who is also Lord of Mann (with two "Ns") and who is represented in the Island by a Lieutenant Governor.

Where did the triskele come from? At least one theory has the Vikings bringing the triskele to the Island from Sicily (which uses a similar device but with a Medusa's head at the centre). There were conflicting theories as to its origin aired in the Coat of Arms 50 years ago, but the Nordic theory is preferred in relation to the Island for obvious reasons. Certainly by 1100 it had arrived as an emblem on the Island as the shaft of a Manx cross in Maughold church shows. And from then onward it has been the symbol of the island.

The earliest instance on the Island is that to be found inside Parish Church at Maughold. For 800 years or so these were the arms associated with the Kingship, and later the Lordship of Mann.

A more recent addition to the ancient arms has been a pair of supporters. The building of the new Manx Courts of Justice led to the realisation that perhaps it wasn't appropriate for the seal of the Court to display the Imperial Arms of general purpose above a representation of a galleon in full sail within a circular legend "Sigillum Curiae Altae in Insula Mannina".

The Peregrine alludes to the tribute paid by the Stanleys (and later the Atholls) as Lords of Mann for the Island at the Coronations until 1821. The Raven is in token of the Viking Associations of the Island - one of the ways in which the Island celebrated the Millennium of Tynwald in 1979 was with the launch of a Viking longship called "Odin's Raven".

The motto means "whichever way you throw it, it will stand". The motto is taken by the Manx to indicate their vigorous capacity to overcome adversity.

The triskele features in the emblems used by every part of the Island's central government.

If you have any information on these arms of Man mail us !