From Heraldry of the World
Your site history : James Rourke
Jump to navigation Jump to search 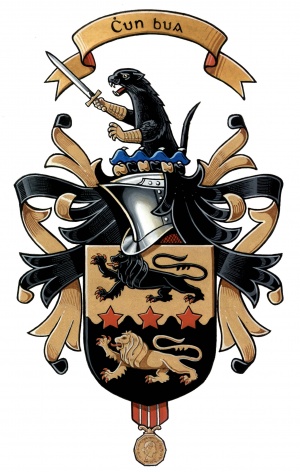 For a crest: Issuant from a bar wavy Azure crested Argent a demi-otter Sable gauntletted Or grasping a sword proper

The colours and figures of these arms are based on those of other O’Rourkes in Ireland. The three red stars are taken from the arms of Frew families and honour Mr. Rourke’s Scottish heritage. The wavy division line symbolizes a sine wave to represent career as a technology consultant.

The master otter, known in Irish folklore as Dubh Dobhar-chú, is a fierce creature inhabiting waterways. Here it symbolizes a love of the sea and of life. Its armour and sword evoke the crest of the O’Rourkes of Ireland. The wavy bar is in honour of past and present generations who served in various naval services.