From Heraldry of the World
Your site history : Jeffrey Raeder Thomas
Jump to navigation Jump to search 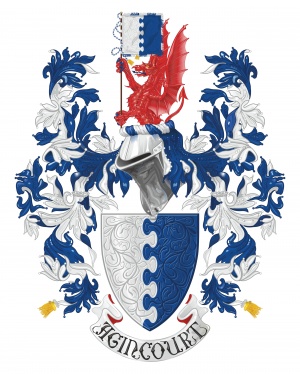 For crest: on a wreath of the colours a demi-dragon rampant gules, armed and langued azure, bearing in pale a banner of the arms.

Arms are derived from those of the armiger's ancestor Sir William ap Thomas, additionally improved with the current crest, the dragon, representing the family's ancient history.

The arms are those recorded in the 1620 Visitation of Cornwall, ascribed to the Thomases of Lelant, Thomases of Crowan, Thoms, Carnsew and the Bosarvanes of St Just families, all patrilineally descended from "Richard Thomas gent. of Wales" who settled in Lelant in Cornwall some time early in the sixteenth century, where he married the daughter and heiress of John Hicks of Lelant.

The Visitation records state "This coate of Pr pale Ar. B. was ye coate armor of Sr Willm ap Thomas, from whom this familye chalengeth to be descended."

Sir William ap Thomas was himself a member of the dispossesed pre-Norman royal family of Gwent, and was married to Gwladys, daughter of Sir Dafydd ap Llewelyn ap Hywel, or" Davy Gam", who was an heir to the Kingdom of Brycheiniog. Davy Gam fell at Agincourt along with Gwladys' first husband.

Sir William also is believed to have fought at Agincourt, where he was knighted on the field.

Despite having numerous descendants, none of the Cornish Thomas families subsequently brought pedigrees on record at the College of Arms, and with the poor state of extant Cornish records from the period, it is now exceedingly unlikely records exist to allow this to be done.