From Heraldry of the World
Your site history : John Joseph McIntyre
Jump to navigation Jump to search 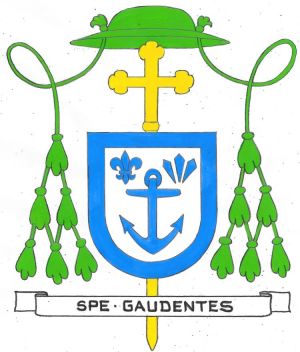 Argent, an anchor, in dexter chief a fleur-de-lis and in sinister chief three Passion nails closing toward the points azure, within a bordure of the last.

The main charge is an anchor. Since the earliest days of the Church the anchor has been a symbol of the theological virtue of hope; the Letter to the Hebrews refers to "the hope that lies before us" as "an anchor of the soul" (6:18- 19). Anchors are frequently depicted on epitaphs in the Roman catacombs, and one famous example from the cemetery of Saint Domitilla dates from the end of the first century. In heraldry, as in the catacombs, the anchor is most often depicted with a prominent cross­ beam below the ring. During times of persecution this combination of cross and anchor enabled Christians to portray the Cross of Christ in a hidden way, and this two-fold symbol stands as a reminder that it is through Christ crucified that we are "saved in hope" (spe salvi: Romans 8:24). In light of this gift of salvation, Saint Paul calls upon Christians also to "rejoice in hope, endure in affliction, [and]persevere in prayer" (Romans 12:12), and the first two words of this verse serve as the Bishop's motto, which appears on the scroll below the shield.

Another reminder of the Passion and death of the Lord is the arrangement of three nails in the top right corner of the shield. Their particular shape and number identify them as Passion nails, representing those that pierced the hands and feet of the Lord Jesus. Most dear among the relics of the crucifixion, the nails here allude to the Congregation of the Most Holy Redeemer (the Redemptorists), in whose seminaries Bishop McIntyre studied as a young man. Moreover, the Bishop's surname, from the Gaelic Mac an t-Saoir, is traditionally interpreted to mean "son of the carpenter (saor)". The nails, chief among a carpenter's tools, thus allude both to the Bishop's family, as well as to the "carpenter's son" (Matthew 13:55) who accepted the nails of the Cross in order to carry out the work of our Redemption.