From Heraldry of the World
Your site history : Jura (canton)
Jump to navigation Jump to search 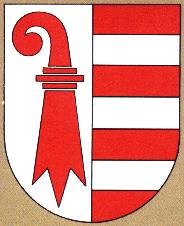 Jura is the youngest Swiss canton, it was created during the early 1970s and became a separate canton in 1978. The arms were based on the older banner of the Jura region, then part of the canton Basel, and dating from 1951. The oldest attempt for a separate symbol for the area dates from 1913.

The initial proposal, for a banner only, combined the staff of the Bishops of Basel, with the arms of the short-lived Republic of Rauracia (Raurakische Republik/Republique Rauracienne), which used arms with the staff of the Roman lictores (see also Sankt Gallen). This symbol, still used by France, was the symbol of freedom after the French Revolution.

The whole Jura historically belonged to the Bishops of Basel, and it was thus logical that the staff of Basel was chosen. The Republic only existed between December 1792 and March 1793. In 1793 it was incorporated in the French Republic. The initial proposal never resulted in the adoption of a flag by the local councils.

In 1943 a new proposal was made, which combined the arms of Basel, with 7 bars, as a symbol for the seven districts in the Jura. This banner was easily adopted as a regional symbol, and, in 1978 also as arms for the new canton.