From Heraldry of the World
Your site history : Kaffe Hag Denmark
Jump to navigation Jump to search 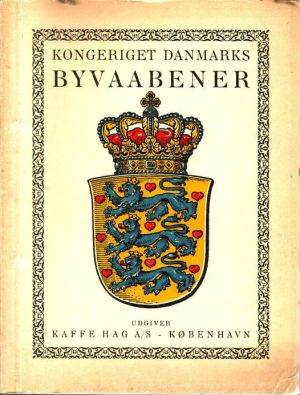 The album Kongeriket Danmarks Byvaabener was issued around 1933. It is not sure when it was issued exactly. Due to the similar text in the back of the album as in the Norwegian album, it is most likely published around the same time in the early 1930s. In a brochure for the German albums from 1935 it is mentioned that the book on Denmark was already published. It was printed at the Nordlundes Bogtrykkeri in Copenhagen.

The album contains only the arms of towns. The stamps were issued in 8 sheets of 18 stamps each, with an additional 5 stamps with advertising. As far as I know there have been no plans to issue a second album with personal arms. 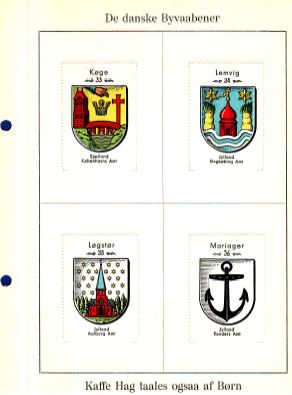 Variation in font (rather slight):

The stamps were issued within the packages or cans of coffee, which also included a coupon for another stamp, or to collect the album, which could be ordered in Copenhagen. Also from other advertising brochures, coupons could be collected. The company also issued a small information leaflet, similar to those issued in the Netherlands, Germany and France.