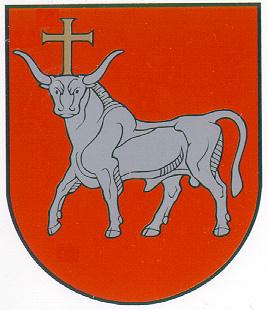 Kaunas received city rights in February 1408 from Grand Duke Vytautas. The oldest seals of Kaunas date from the late 15th century and show a shield with an ox walking upwards. The ox was a highly prized and revered beasts and only the dukes and high nobility were allowed to hunt them. It was probably chosen as a symbol for strength and honour. On the second seal, dating from 1492 a small cross appears above the back of the ox. It was the cross of the Teutonic Order and added as a symbol for the German community in the city.

In 1530 the cross was replaced by a Latin cross between the horns of the ox. The ox was now also shown normally. The cross was probably added by Bona, Queen of Poland and Grand Duchess of Lithuania, who fought against the protestants in her countries. These arms remained in use until 1843.

The city received new arms in 1843 from Emperor Nicholas I. The new arms showed a silver obelisk in a blue field. The obelisk commemorated the war of 1812, the image was based on a obelisk in Kaunas erected in 1843 as a monument for the battle of Borodino. These arms were used until 1915.

In 1915 the city restored the old bull in its arms, whereas the Germans destroyed the real obelisk. After the war most of Lithuania became part of Poland, and Kaunas became the capital of the new Republic of Lithuania. In 1935 the government granted arms with the bull, shown as a bison, on a golden base.

In 1940 Kaunas became part of the Soviet Union and all arms were abolished. In 1969 the use of arms was permitted again, and the city adopted arms with a bison, without a cross, on a green base. In 1970 the arms were abolished again.

The present arms, which are based on the 16th century seal and have been used for many centuries were officially granted on June 30, 1993.