From Heraldry of the World
Your site history : Keith Grammar School
Jump to navigation Jump to search 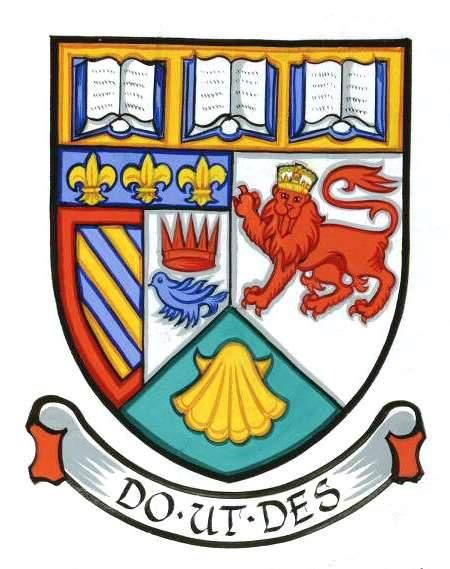 Tierced in pairle reversed; 1st, per pale dexter bendy of six Or and Azure within a bordure Gules; sinister Argent, an antique crown in chief Gules and a martlet in base Azure, on a chief of the last three fleurs-de-lys Or; 2nd, Argent, a lion passant guardant Gules, imperially crowned Or; 3rd, Vert, an escallop Or; and over all upon a chief Or three open books Proper, binding and fore-edges Azure.
Motto : Do ut Des

The design of the arms is derived from those of the Burgh of the Keith with a chief containing books to symbolise education.

When designing the arms, Lyon Innes of Learney noted that, while it was the usual practice when devising school arms to divide the shield per pale, with the arms of the community on one side and educational charges on the other, the complexity of the Keith burgh arms made this difficult to achieve effectively. The Keith element of the arms is divided into three parts: the left portion represents the Cistercian Abbey of Kinloss and its Lordship of the Regality of Strathisla, the right portion represents Ogilvy, a family which had interests in the area, and the base section represents Duff, another local family.