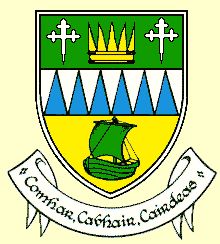 The arms are in the familiar green and gold sporting colours of county Kerry. The blue and white dancetty bar symbolises the county's mountains, the highest in Ireland. The crown stands for the Ciarraige, the pre-Gaelic population who gave their name to the county. The two crosses are for the monasteries of Ardfert and Aghadoe.

The design is completed by a representation of the boat of St. Brendan the Navigator. In this boat legend has it that he discovered America.The motto means "Co-operation, Help, Friendship".