From Heraldry of the World
Your site history : Kindenheim
Jump to navigation Jump to search 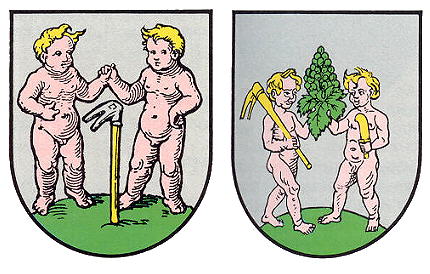 The two children (Kinder) already appear on the oldest known seal of the village, which dates from the early 15th century, but which is only known from 1544 and 1572. Later seals also show the two children, and the last seal, from 1814, was used for the design of the arms of 1841. The seal from 1662 showed a flower between the children, as well as a bunch of grapes and a sickle, the seal from 1814 showed a kind of tool. The tool was later defined as a kind of toy, but in 1841 as a hook used in the iron factories in the area. In 1967 the attributes of the different seals were combined, showing a bunch of grapes between the children, who each bear one of the tools (hook and sickle).