From Heraldry of the World
Your site history : King's School, Tynemouth
Jump to navigation Jump to search 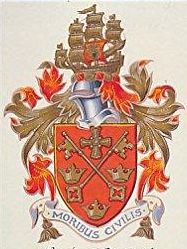 Arms: Gules, two keys in saltire between in chief a representation of St. Cuthbert's pectoral cross Or, in base an ancient crown, and in fesse two like crowns Or.
Crest: On a wreath of the colours, A representation of H.M.S. Royal Sovereign of early nineteenth century date Or, the lower mainsail gules charged with a lion's head affrontee crowned with a naval crown gold.
Motto: Moribus civilis

If you have any information on these arms School, Tynemouth mail us !