From Heraldry of the World
Your site history : King Edward VII Hospital, Windsor
Jump to navigation Jump to search 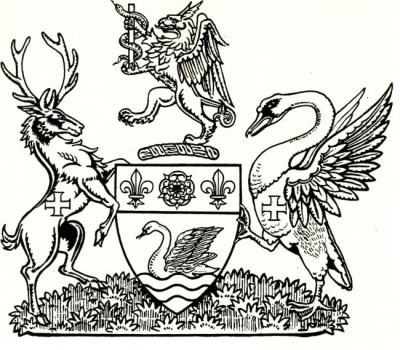 Arms : Argent, on water harry wavy in base a swan proper; on a chief azure a Tudor rose also proper between two fleurs-de-lys Or.
Crest: On a wreath of the colours, A griffin segreant holding between the forepaws a rod of Aesculapius Or.
Suppor­ters: On the dexter side a stag argent and on the sinister side a swan rousant proper, each charged with a cross couped gules.

If you have any information on these arms Edward VII Hospital, Windsor mail us !